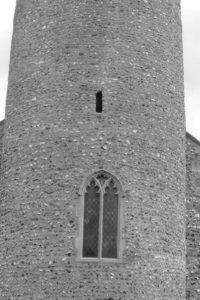 Tower at St Peter, photographed by Bill Goode in July 1975. 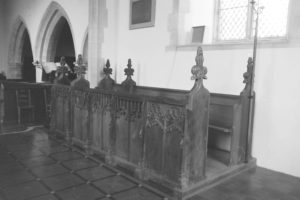 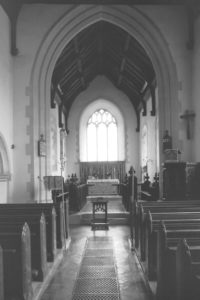 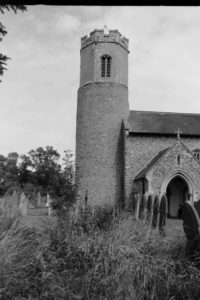 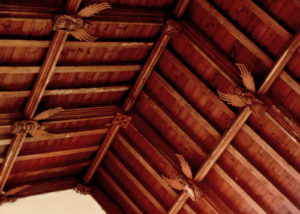 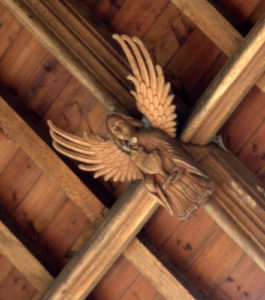 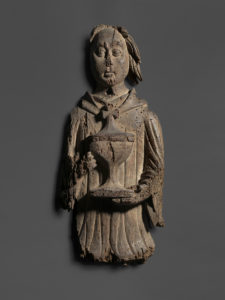 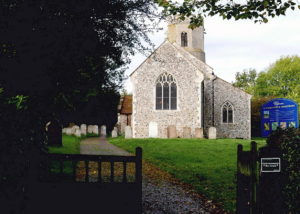 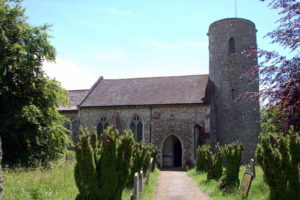 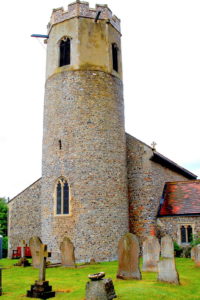 A rare oak carving of a roof angel in a south Norfolk round tower church was among the stars at a London summer exhibition. The Swainsthorpe angel was displayed in the Medieval Art in England at the Sam Fogg Gallery, off Bond Street in 2019.

Some of the finest examples of wood carvings, sculpture and jewellery for the month-long exhibition were brought together by a former Norwich School pupil, Matthew Reeves, who now lives near Aylsham. The angel, now in a private collection, was probably removed during the major 1885 restoration. Today, a replica can be seen with its fellows in the church roof. It features a large covered chalice, decorated with a cross, which is held in both hands. The angel is carved in relief and has a tunic, which stops just below his waist.

In common with most East Anglian roof angels, the body does not continue beyond this tunic. The angel has a stoic expression, with pursed lips, eyes wide open and raised eyebrows. Mr Reeves, who wrote the extensive catalogue, said that its round, fleshy face has a delicate nose and the hair is gathered into long pinecone clumps. This carving would have originally been a part of a larger scheme of angel figures pinned to the hammer beams of a church roof. The wings would have been separate fixtures attached between the figure and the beam.

In the later Middle Ages hundreds of angel roofs were made. Mr Reeves said that one of the first was the impressive hammer beam roof of Westminster Hall, built at the end of the 14th century. It has been suggested that the design for this first angel roof may have been influenced by King Richard II’s angel badge, which was included as a stone frieze in Westminster Hall.

The roof’s master carpenter was Hugh Herland, who is thought to have worked on another such roof in Great Yarmouth in 1394 after the Westminster project was completed. Mr Reeves said that this second project in Norfolk, where Herland was known to have worked with several local carpenters that probably caused the spread and popularity of angel roofs in East Anglia.

There are 170 surviving angel roofs although many are heavily damaged and restored and more than three-quarters are in East Anglia.

The Swainsthorpe angel holds the chalice that would have been presented to Christ as he prayed in the Garden of Gethsemane. This angel’s round face, his hair and simplified facial features are similar in style to the surviving angels at St Peter.

Thought to have been carved before 1500, it measures 56cm (22ins) by 24.5cm (10ins). It shows some signs of woodworm damage and to features including breaks at the tip of the nose and chin. Taken from The Round Tower magazine (December 2019)

Picture (above of chalice angel) Courtesey, Sam Fogg, London. Others by Tony Walsh.