Grants and work in churches

The Society supports round tower churches with grants for repairs and improvements. In its 48 years, it has given grants of more than £300,000.

The first grant to Cranwich in August 1974 was £20 – just months after the Society had been founded.

A full summary of all reports, including financial statement, was published in the September 2021 edition, The Round Tower. This was posted to all members.

Gifts, donations and bequests – Many members give more than the minimum £20 (£30 joint) subscription – thank you.

The Society has received generous legacies including £5,000 from Diana and Philip Woodfield, and from Stan Barnes, who died in 2018 and left £78,000.

Brian Harmer’s legacy (Obituary, Round Tower, September 2008) was used to supplement grants. A list was reported in the Round Tower, December 2015.

Stephen Hart also left money for repairs to churches as well as photographic and other archive material.

Details of how to make donations ands legacies can be found on the website. The charity’s official registration number 267996 can be included in legacy details.

A collection of stamps left by Ian Pettman’s estate raised £400 for the Society.

To apply for a grant from RTCS, or contact the grants’ officer, listed on the committee tab, or download the Grant form.

Thanks to the Stan Barnes legacy, half of these awards were met by his generous bequest.

July – £5,000 was awarded to two round tower churches by the Norfolk Churches Trust.
St Mary’s, Beachamwell, was awarded £3,000 towards re-thatching, It follows the theft of lead from the south aisle in 2019. St Michael, Aslacton, received £2,000 to repair internal cracks in the chancel on the east and south walls. This work will cost about £10,000.
The NCT awarded £12,000 in grants. In total, 21 churches have been given more than £75,000 this year by the NCT.

May – Another £6,500 to carry out pressing repairs for three churches was agreed by the Society’s committee.

It awarded St Edmund’s Church, Acle, £3,000 towards the costs of thatching. This matches the grant by the Norfolk Churches Trust.

It was agreed that half these proceeds would be funded by the  Stan Barnes bequest.

APRIL 2020 – Five round tower churches have received repair grants from the Norfolk Churches Trust. It awarded £65,325 shared between 16 churches across the county including £10,000 to St Peter’s, Merton, near Watton.

The other churches receiving a total of £8,500 were St Edmund, Acle; St Andrew, Wickmere; St Mary, Haddiscoe and St Andrew, Great Ryburgh. The grants to round tower churches included £3,000 to St Edmund towards re-thatching the north side of the nave and the ridge. A contribution of £2,500 to the repair and replacement of the central east window at St Andrew’s, Wickmere. This panel had to be removed last winter because it had become unsafe.

St Mary, Haddiscoe, was awarded £2,000 to repair lead sheeting on the south side of the nave roof, where slippage has taken place and allowed water ingress. The Society also made a £1,000 grant in March. And £1,000 was given by the Trust to St Andrew’s, Great Ryburgh, to re-lead and repair the westernmost south chancel window, a William Wailes window dated 1870. It is one of the 12 remaining windows in the church commissioned by the Tatham family between 1866 and 1883.

The NCT has given a total of £10,000 to St Peter’s as it faced an unexpected bill of more than £17,000 for replacing rotting roof timbers.

The church had received about £100,000 last year from the National Lottery Heritage Fund for a zinc roof and to create a centre for heritage activities and to welcome visitors. This work on the nave roof started in late October but as it was nearing completion in mid-January, unexpected major problems came to light. An urgent appeal was made and the Society’s committee, which met in early March 2020, approved an immediate grant of £4,000 (with half from the Stan Barnes legacy) and the Norfolk Churches Trust contributed a total of £10,000. Even more fortunately, the Paul Bassam Trust added £2,0000. St Peter’s, which was the victim of a major lead theft in 2015, sustained a further theft of lead from the south aisle – hence the decision to replace with zinc. All the work has now been completed although removal of scaffolding has been delayed because of the on-going Covid-19 crisis.

Three grants £6,000 were made by the Society in March. A total of £4,000 was given to St Peter’s Church, Merton, which needed funds to finish a major building programme.

Two other churches, St Mary’s, Haddiscoe, and St Peter’s, Theberton, were awarded £1,000 each – to enable roof repairs to be carried out.

There was urgency at St Peter’s Church, Merton, near Watton, because additional problems came to light as replacement of the nave roof neared completion. The builders found that timbers supporting the roof and adjoining the tower had to be replaced. This extra work would leave the church with a shortfall of £17,210, so the grant – with half the funds from the Stan Barnes legacy – was agreed.

St Peter’s received a National Lottery Heritage Fund grant, as reported in the June 2019, Round Tower, of £100,000. It decided to replace the lead roof with zinc – having twice been a victim of lead thieves in the previous eight years – and  transform the church into a local centre for community and associated activities. In 2015, the south aisle roof was re-roofed with zinc following lead theft. Repairs to stonework were carried out at the same time. A few weeks after the church re-opened, the lead was stolen from the south side of the nave roof. While a tarpaulin protected half of the nave – with passage of time as funds were raised and permissions obtained, it deteriorated.

St Peter’s, Theberton, needs to repair and “dress-up” reed thatch, which will cost some £2,400. The thatcher said that this “stitch-in-time” should extend the roof’s life by some years. The Society has made grants to this church over the years for various other works including £2,000 in 2013, £500 in 2008 and £500 in 2003. There are looming issues with major repairs to the tower highlighted, which could cost more than £100,000 although no precise investigation has yet been carried out.

Two Broadland round tower churches were given £8,000 by the Round Tower Churches Society in December. It gave £5,000 to St Mary’s, Surlingham, near Norwich, towards the estimated £140,000 repair programme.

It has a nationally-important ringing mechanism in the 14th century tower, which holds two of Norfolk’s oldest bells dating from 1381. These bells were cast by William Dawe, of Norwich, in the year that the 14-year-old King Richard II faced the leaders of the Peasants Revolt in London’s Smithfield. Major repairs are need to replace rotten timbers supporting the tower’s bell frame, which holds the unusual metal ringing mechanism made by Moore, Holmes & MacKenzie, of Redenhall, near Harleston, in 1889.

Sally Mitchell, who has been a churchwarden for the past 20 years, said that the Society’s grant will help to pay for repairs which will throw water away from the tower. However, having been twice turned down for national heritage grants, the medieval church needed to raise significant funds to complete the rest of the conservation works.

The Society, which has also reported a further increase in membership, has now awarded more than £30,000 this year, to help round tower churches.

Work in some round towered churches in 2016 and earlier years.

East Lexham tower was swathed in scaffolding in August 2016. 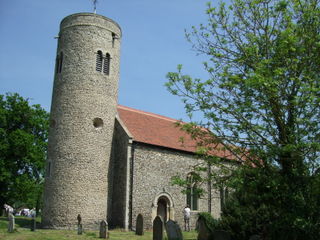 Gissing, St Mary’s has received a development grant of £30,500 from the National Lottery Heritage Fund. The grant will allow for investigation and research work as well as the preparation of specifications and drawings to enable them to seek tenders for the works. The project will concentrate on six distinct areas of the church including the south chapel, chancel and round tower. Work started in February 2017.

Appleton church ruins project received £12,500 from FCC Heritage Fund. This was used to stabilise the stonework at St Mary’s, Appleton, West Newton, on the Sandringham Estate. 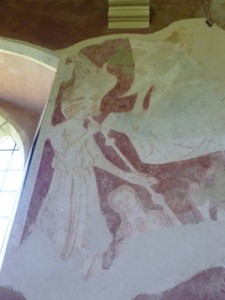 In addition £2,500 was donated to the support the “Raise the Alarm” campaign in December 2017. This partnership, led by Norfolk’s Police & Crime Commissioner Lorne Green, raised £250,000 to install alarms on vulnerable churches. It was also backed by the Diocese of Norwich and the Norfolk Churches Trust and insurance companies.

Churches are also supported with donations when the Society visits them: in 2017-2018 this amounted to £735.

Grants for 2018-2019: to date grants have been promised for Swainsthorpe and East Walton and we have received applications for funding from Syleham and Little Snoring. 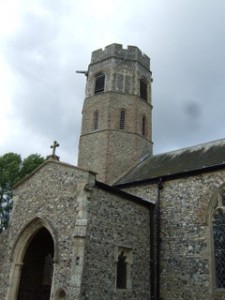 Topcroft. £1500 to help resolve a damp problem at the base of the tower.

Lamarsh. £2,000 towards removal of old plaster and  replastering parts of the tower.

Intwood. £250 towards refixing of lead flashing to the roof.

Gissing. £500 towards structural repairs to the vestry, and updating the electricity and towards the heating. 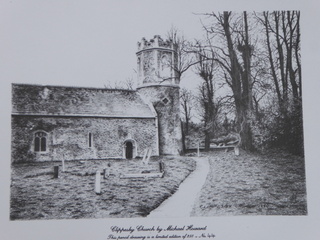 Clippesby £2,000: tower and masonry repairs, new rainwater goods. For great photos go to: http://www.clippesbychurchandcountryside.co.uk/hlf-action/4583691201 In thanks for the Society’s support, we were given a recent drawing of the church

Merton £500: lead roof replacement. Merton lost the lead on its roof in August 2015, only four years after the last theft. RTCS sent £500 and to help kickstart their bids for funds to repair the roof.

Thwaite £500: replacement of stolen lead from roof of south aisle. 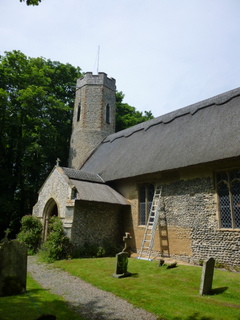 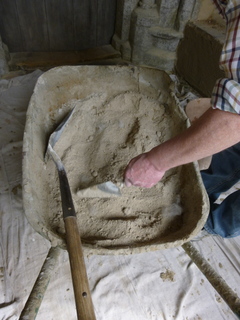 Horsey:  £1,000 to repoint south wall. Nick and Teresa Wiggin attended a rededication service on behalf of RTCS. Photograph of the work in 2014 (see photo left).

Hardwick:  £2,000 Renew the roof. Unfortunately it was not possible to see inside the church on our August 2015 visit. 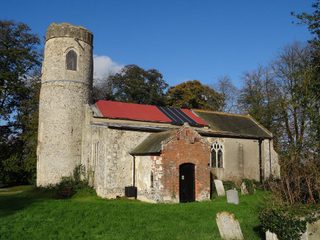 Mettingham All Saints. £500. Belfry west window repair. Photograph after the theft of its lead roof.

St Edmund’s Taverham £1,000 for replacement of pantiles on the north slope of the nave roof,  cracking because of frost

Herringfleet’s new chancel roof was completed just in time for Christmas Day service in 2012. Photos of the roof and Mr T D Mee’s drawing of Herringfleet 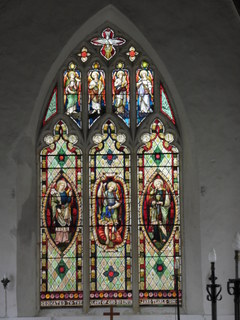 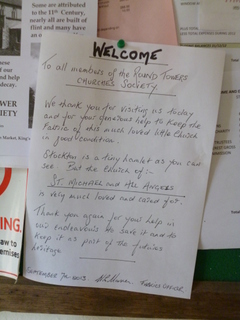 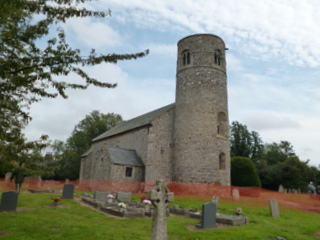 Stockton new window and letter of thanks, work under way at Gayton Thorpe

St. Michael and All Angels  Stockton  £2,000 for repairs to East window.

St Peter and Paul’s Bardfield Saling £250 towards repairs of windows.

All Saints Hemblington £1,000 towards repair of nave roof and rainwater goods.

St Peter’s Yaxham £1,000 towards repair of the east window

Sts Mary and Walstan’s Bawburgh £2,000 towards repairs to tower, roof and walls.

£5000 – the largest grant RTCS has made – was a contribution towards the new thatch at St Mary’s Cranwich. 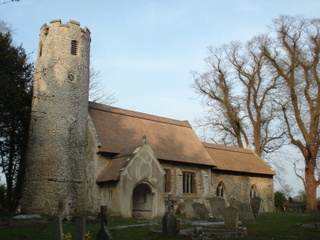