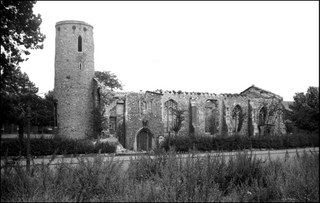 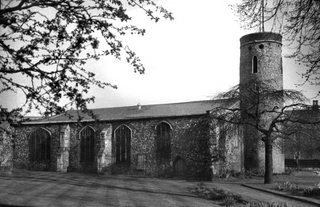 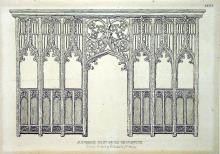 Cotman's drawing of the rood screen at St Paul's, Norwich. 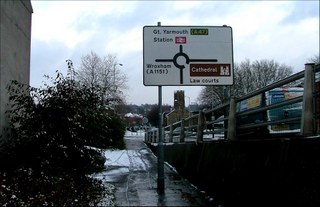 The site of the former St Paul's Church, Norwich.

For origins of the church and its foundation (see below)

The site of the church is largely under the road by the roundabout on the inner ring road, north west and diagonally opposite St James Church (now the Puppet Theatre). St Paul’s church was damaged by bombs in 1942 and subsequently demolished.

The church and adjacent hospital (for poor strangers, vagrants, sick and impotent folk) were founded at the time of Bishop Herbert de Losinga in the early 12th century (ie a century before the Great Hospital).

The tower was probably Norman with a later (possibly 15th century) octagonal top. The top was removed in 1819 and capped with brick and stone. Round cast iron wall plates (nb not round windows) were put in to strengthen the tower. The rest of the building was largely late 15th century.

A Cotman drawing, 1814, shows a fine late 15th century rood screen with elaborately carved tracery and armorial shields: at this time wealthy people had settled in the parish (see www. norwichmedievalchurches.org/churches). For a time the church was used as the city’s Bridewell. The church and the hospital were lost under the road in 1970s: the graveyard is now a small park and playground. Richard Harbord wrote about St Paul’s in The Round Tower (September 2008).

Shirley Howell wrote in the Round Tower (March 2001) that she was involved in reconstructing the parish registers of St Paul’s church for 1614-1812. The original records were destroyed in the 1942 bombing but fortunately they had been copied on microfilm in 1939. She spent 18 months transcribing the microfilm. They can be easily accessed at Norfolk Record Office.

Norwich – St Paul’s Hospital: – Eborard, Bishop of Norwich, Ingalf, the first Prior, and Richard de Baufe, Bishop of Avranches, founded this hospital and church between the years 1118 and 1145.

The church is now the parish church of St Paul’s and the hospital buildings stood to the south on a site called Cow’s Croft. They endowed it with the whole croft, which was later known as the manor of St Paul’s, and with divers lands and several churches, all of which gifts were confirmed by King Henry I, and ratified by the Pope, and the fraternity were enjoined to pray for the soul of Bishop Herbert de Lozinga. Some tithes were granted to this hospital in 1119. Besides being a founder, Bishop Eborard also granted an indulgence of 40 days pardon to all benefactors.

This hospital of St Paul, was also known as Norman’s Spital, and derived this name from Norman, a monk, who was the first master or proculator here, and a good benefactor, the church was made parochial and appropriated also for the use of the hospital, by the founder, Bishop Eborard.

In 1198 the rectory of St Paul’s was appropriated to the hospital, the master of which had all the spiritual jurisdiction of his own exempt parish, and proved wills etc as official of this exempt jurisdiction. He was always nominated by the prior and convent of the cathedral.

The Hospital of St Paul was endowed with the churches of Ormesby St Margaret, St Peter, St Michael and St Andrew, the second and fourth of these Ormesby churches have now gone entirely to decay. And tithes and portions of tithes were held in Marsham, Blickling, Ormesby, Filby, Blofield, Bacton, Thorpe, Trowse Newton, Langham and Taverham, and the manor called Norman’s in Norwich.

It was dedicated to St Paul the Apostle, and St Paul, the first Hermit. The list of benefactors contains about 20 names, and includes that of King Henry I in 1135, and the names of four bishops.

This Hospital consisted of a procurator, custos or master, in priest’s orders, a warderess or woman guardian, and 14 poor men and women, but after 1429 it was changed to 14 women. It was also used for the relief and lodging of poor strangers and sick impotent persons, and for the lodging of wayfaring men and women. Allowances were made to divers women called poor sisters in this hospital, who prayed daily for the souls of the founder, of King Henry I, of King Stephen and Queen Matilda.

The separate valuation of the revenues of this hospital is not given in the returns made by order of King Henry VIII, but it appears from thence that nearly £40 were appropriated in annual alms to the master, the poor sisters and others, and that the rectories of Ormesby and St Paul’s were returned at £22 3s 4d (£22.17)

After the Dissolution the hospital and its revenues were assigned to the Dean and Chapter, who made the church a donotive, the hospital was converted into a Bridewell “for lazy beggars” in 1571 and used as such until 1785, being granted to the Corporation of the city.

The church is now parochial, and in the gift of the Dean and Chapter. The hospital site and part of the revenues belonged to the Corporation, and were applied in support of St Andrew’s Bridewell. The remains of the spital were leased by the city, and were occupied in the early part of the last century as a malt house.

Certain remains of old walls and re-used materials in later buildings may still be seen to the south of St Paul’s Square. Claude J W Messent.