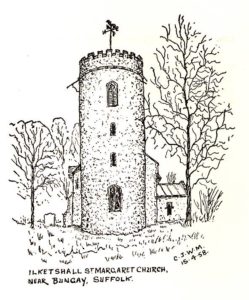 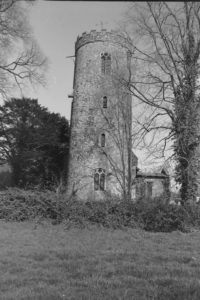 Tower of St Margaret, Ilketshall, photographed by Bill Goode in 1971. 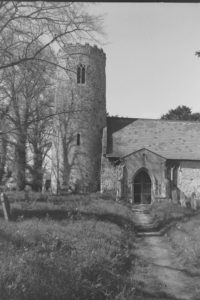 Tower and porch of St Margaret, Ilketshall, photographed by Bill Goode in 1971. 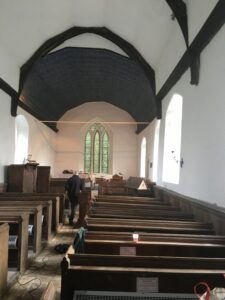 After coats of limewash, the interior of Ilketshall St Margaret gleams like new. Photograph: Fiona Chapman. 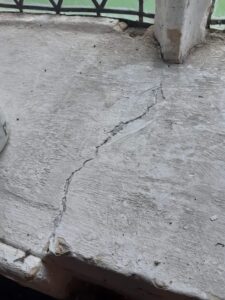 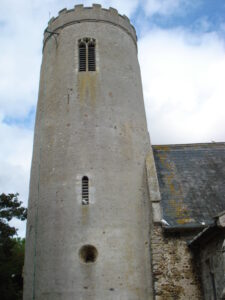 The round tower of Ilketshall St Margaret. Photograph by Michael Pollitt on September 25, 2021. 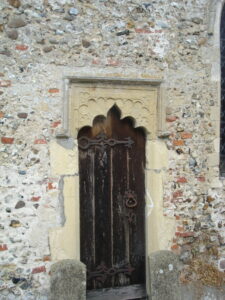 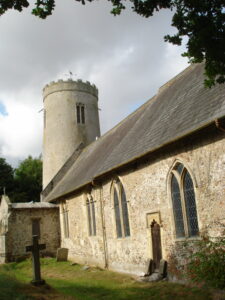 The tower here is newly rendered, which covers the flint work. However, the date of the 11C is revealed by two circular openings, framed with flint, at about ten feet from the ground. These were only revealed in 1993! There are three stone-framed slit windows in the first floor stage, and higher up there is evidence of the 11C belfry, though only the west opening is now visible and that has been altered in size.

The church is more or less the same width for nave and chancel, but the chancel roof is fractionally higher than the nave’s. The north nave has a 12C blocked doorway, with a 19C circular window, with a trefoil, inserted within its stone arch.

The chancel retains its 13C window tracery, with the east one having intersecting Y pattern. On the south chancel wall is an 18C Gothic doorway, with foiled shallow carvings below its square-headed hoodmould, and a cinquefoiled arch. The south porch has the remains of flushwork panels on its face and buttresses.

The tower arch is pointed, but it has been altered a bit. Above it are the Stuart Royal Arms for Anne with her motto “SEMPER EADEM”, dated 1704.

The font is 15C, with four hanging shields alternating between two flowers and two square leaves. There are angel heads with wings overlapping in the corona, with a band of fleurons below. Possibly the stem once had lions around it? It has a 17C flat font cover.

The nave has a plastered barrel vaulted ceiling, with parts of the arch-braces to the rafters above visible.

The chancel has a boarded ceiling, painted dark blue with gold stars. The chancel has a piscina with a credence shelf. The carvings above its cinquefoiled niche are similar to those at the top of the outside of the priest’s doorway. The altar rails have close-set balusters, from the 17C.

A complete “whitewash” of a north Suffolk church in 2020 has transformed the interior. For the first time in almost 70 years, the nave and chancel of St Margaret, Ilketshall, near Bungay, has been painted throughout.

The Society gave £3,000 towards the major redecoration, which took a three-strong team of painters a fortnight to complete. They applied three coats of whitewash, said the treasurer, Barry Chapman. The redecoration project, which also involved repairing a number of cracks and also replacing some areas of missing plaster, cost about £7,000. The porch was also badly in need of some care and attention and needed a total of seven coats of whitewash, he added.

“What was a gloomy and rather depressing interior is now bright and gleaming,” said Mr Chapman. It was last painted in 1953, he added.

Fiona Chapman, who is the lay chairman and has been on the parochial church council for almost 30 years, said that the builder and painter Paul Birkin, of Ilketshall St John, has done a fantastic job. His team has also whitewashed and repainted a number of other local churches too. A generous parishioner met half the cost of the re-painting. “When the scaffolding was taken down, we could see it just looked glorious,” she added.

Mrs Chapman said when the interior was last decorated, the wrong mix of products was used. The architect, Philip Orchard, of the Whitworth co-partnership of Bury St Edmunds, recommended traditional whitewash.

In October, electrical work costing about £10,000, was completed as pew heaters and lights were upgraded. The Suffolk Historic Churches Trust gave £1,500 towards the cost, which was much appreciated.

Mr Chapman is now looking to the next big event in the church calendar – the Christmas eve carol service, December 24, 2020. It starts at the village hall at 3pm, then processes to the church.