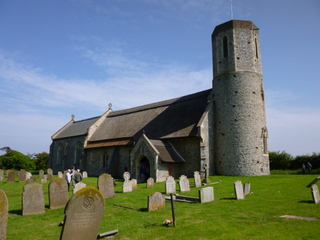 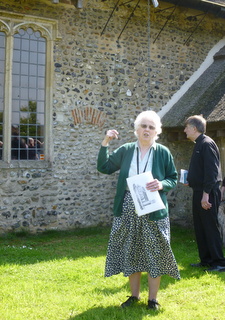 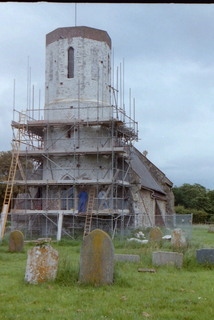 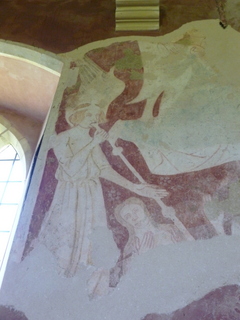 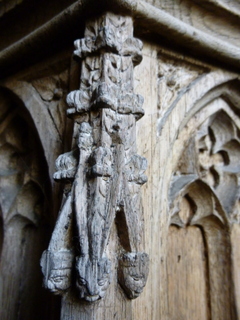 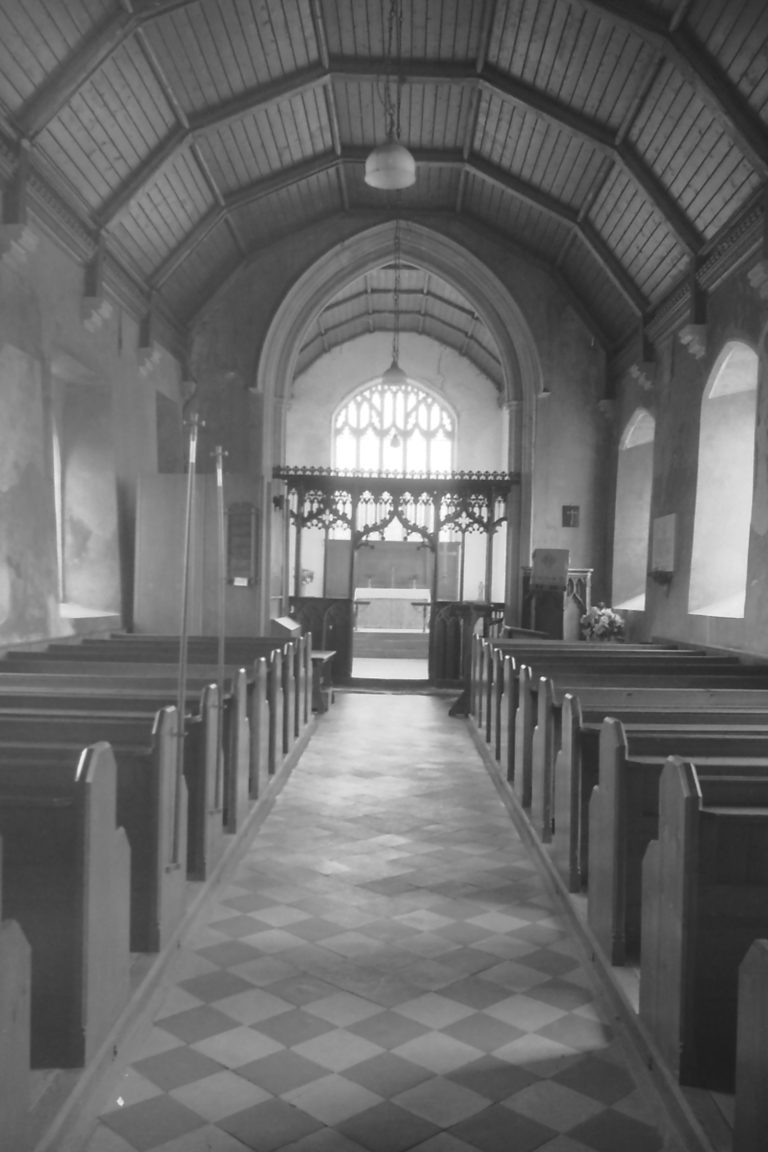 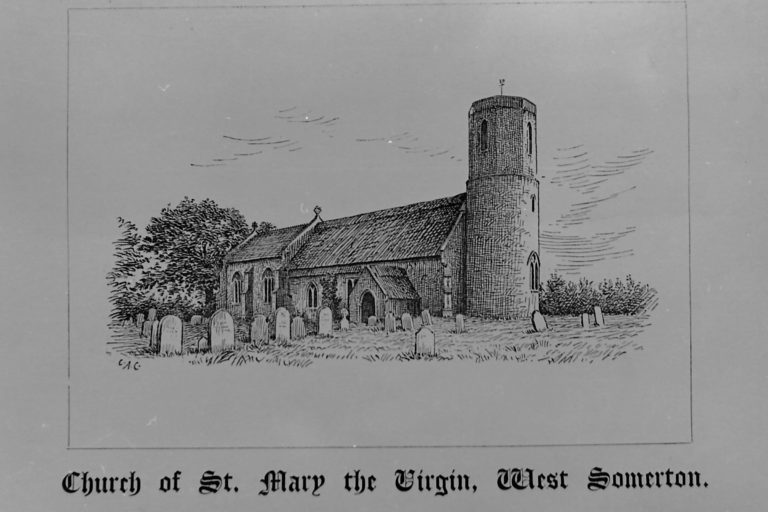 Drawing of St Mary the Virgin, West Somerton, from the 19th century. 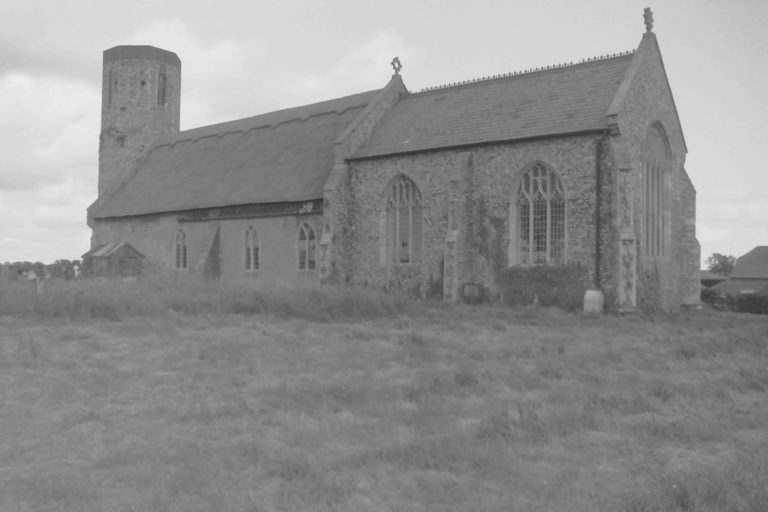 Hales, the Norfolk Giant – Some years ago the tomb of the Norfolk giant, Robert Hales, was in a poor state, and an effort was made to restore it by village folk. They collected money among themselves and the tomb now to be seen is the result of their efforts. It is a worthy monument, in length over all, 6ft 6ins.

The inscription is as follows Beneath are deposited the mortal remains of ROBERT HALES The Norfolk giant, whose height was 7ft 8ins. He died at Great Yarmouth November 22nd, 1863 Aged 50 years. Reader, the dust must be your bed, Vain are opposing powers; The wise, the strong and crowned head, Must lie as low as ours.

This tomb is erected by his widow.

I have seen many records of Hales, which give his height at 7ft 6ins, but his family have inscribed that he was two inches taller than generally known, and it is still the belief of Somerton folk that the tomb record is correct.

Every note states Hales died aged 46, but his family have always said he was 50, and apart from the tomb, I have seen a memorial card that they issued as follows – “In affectionate Remembrance Of the late ROBERT HALES, Who departed this life November 22nd 1863, Aged 50 years, And was interred in Somerton Churchyard, near Gt Yarmouth. With the family’s kind regards

In his younger days Hales served on board H.M Cutter Ranger; and subsequently joined the brig Neptune, in the merchant service, and voyaged to Calcutta, but his size caused him to forsake the sea and exhibit himself. A story not generally known but true is his enlistment in the 31st Regiment of Foot, which actually occurred at Chatham on January 7, 1845, and took place at the Dover Castle public house. The giant took the Queen’s shilling from Sergeant Reed of the regiment, but in the morning after the effects had worn off the giant appeared in court before the magistrates to obtain his discharge, which was granted by paying the smart money and costs.

There is a story current among Somerton people that his death was from remorse over the early end of his sister Mary. She formerly exhibited with him, and stood 7ft 2ins. She died in Guernsey in 1842 from inflammation of the chest.

Dawson Turner, in his notes on Norfolk, stated that Hales was engaged with Tom Thumb to go to America in 1848 by Barnum for £800 per annum. It is said that on his return he fell into the hands of sharpers, who in one night plundered him of his hard-earned savings. Certain it was that our giant in his latter days was in sore straits, for during the summer before his death he was to be often seen on the local Britannia pier selling little biographies of himself for a penny each. Robert Hales was buried on Thursday, November 26, 1863 – A R Bishop.

A further footnote by Percy O Bramble, of Caister-on-Sea (Saturday, January 3, 1931) states that Robert Hales was baptised on October 31, 1813. He was presented with a gold watch and chain by Queen Victoria, and was also presented to Louis Phillippe, King of the French. It may not be generally known that a very large canvas painting of the Norfolk giant is in the Castle Museum, Norwich, and was formerly was on view outside his show.

The church in which the Norfolk giant worshipped is a humble fabric, and stands on high ground on the Martham road (from Winterton), a position giving it a splendid view of the marshes and sea coast stretching away to Horsey etc.

Its western tower has its lower half circular, the upper portion is octagonal, finished off with a deep course of bricks. In each section of the upper stage was originally a window, an unusual number, but some have been filled up with flints and others boarded up. The tower contains one bell, which is among the oldest in the county, being cast by Thomas Belyter, of the Lynn Foundry, before 1400. There is an inscription upon it: “x Johannes : De : Lenne :Me ; – Fecit.

The nave, which is very small, is thatched, and the two rows of tiles on either side, which were apparently placed to help throw the rain clear, give it an odd appearance. The chancel is very substantial, built of flint in the Perpendicular style, as is also the small north porch, over which a small cross has recently been placed.

The church attracted much attention years ago by reason of the discovery of the mural paintings upon its walls that were revealed during restoration. The visitor will need good eyes to discern them, for they have faded very much. The subjects are: “The Day of Judgement” (between windows on the south nave wall), “The Entry into Jerusalem,” The Flagellation,” “The Resurrection” and a figure of St Christopher. The old oak screen dates from the 15th century, and what is left of the old Perpendicular panelled pulpit has been carefully placed on a decent base to allow of its continued use. The barrel organ still has a place of honour in the church, but no longer gives service.

In the path directly outside the porch door can be discerned an old cross slab or stone coffin-lid that is partly covered by gravel. Apart from the graves of various members of the Hales family, there are others that attract notice by their length – one, that of “Mary Laskey, wife of Joseph Laskey, who died 3 August, 1841” measures just 8ft in length. Another – that of Ann Laskey – is 7ft 5ins long.

There is some connection between this family and the mother of the local giant, who was said to have as ancestor that famous warder of Bluff King Hal, who stood 8ft 4ins.

The War Memorial is a little unusual – a short column with a lion couchant at the top and approached from the road by a flight of steps – A R Bishop.