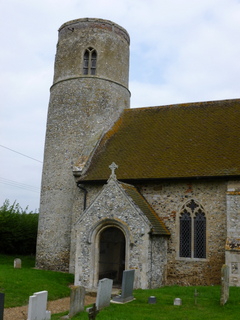 Tower and porch at All Saints. Date unknown. 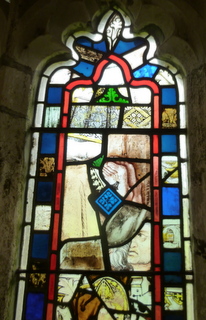 Stained glass at All Saints. 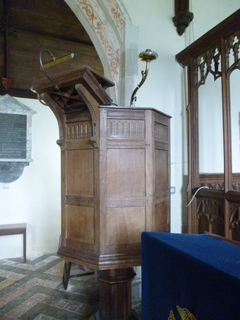 Pulpit at All Saints. 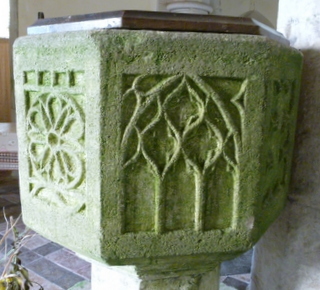 Font at All Saints. 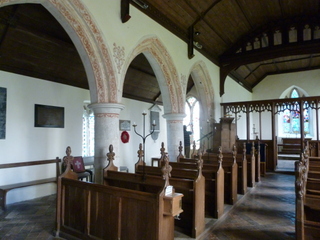 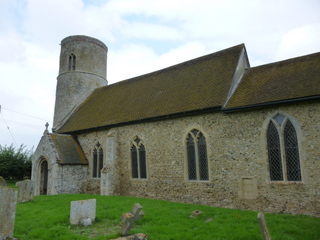 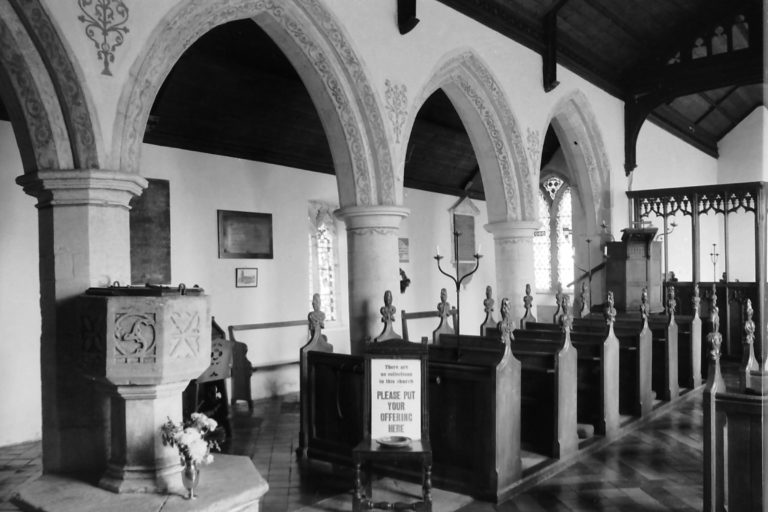 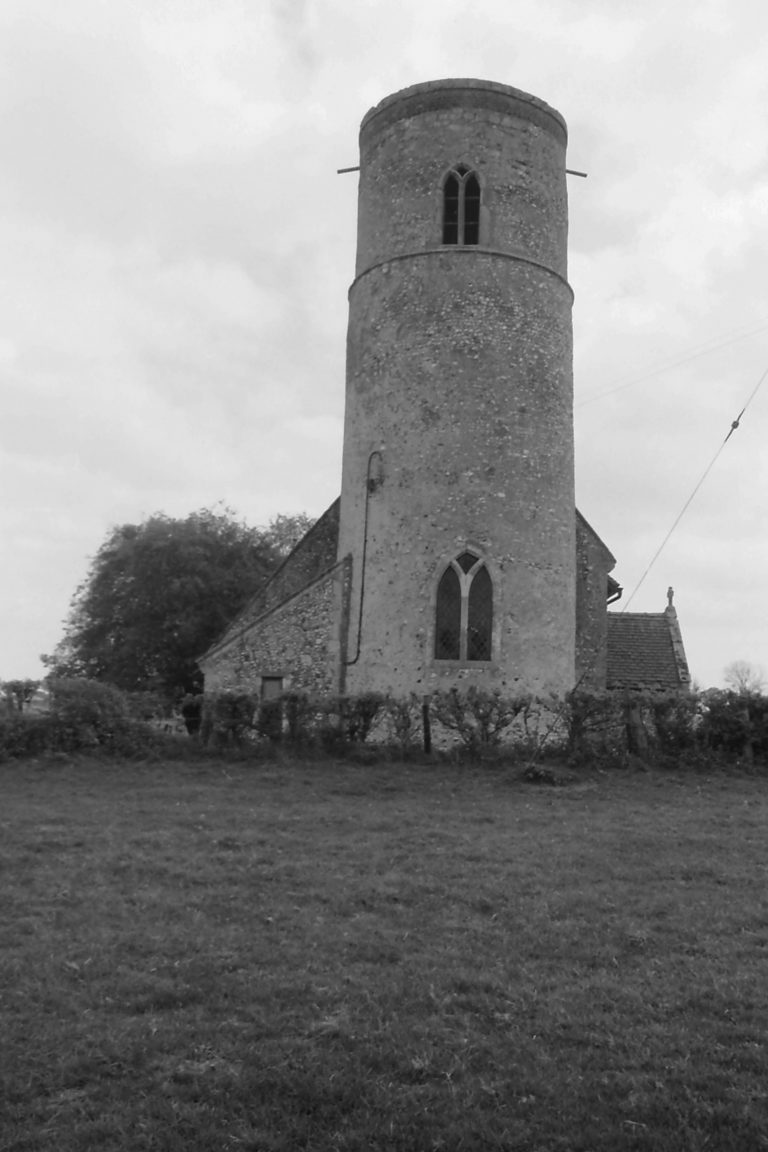 In an isolated position, next to a farm, it is on the site of a Roman villa. The tower is circular to the top with a stone string course below the belfry and a modern brick parapet. The flints are closely packed and coursed. The belfry windows have Y tracery, as do some of the windows in the chancel and nave. The nave and chancel are continuous and there is a north aisle with arches decorated with red leaf trails.

Stephen Hart considers that the presence of Y tracery windows in the tower, nave, aisle and chancel suggest they were built at the same time, probably in late C13 or early C14. The church has C14 font, fragments of C15 glass and a Jacobean pulpit.

Restoration work in the 1980s revealed the plan of a Saxon church with an apsidal chancel, as well as the decoration around the arches. The porch was built at this time.  Jack Sterry visits Threxton in his 2007 book Round Tower Churches to the West, East and South of Norwich

A £127,000 repair and restoration project has transformed the tower, Michael Pollitt reported in The Round Tower, (September 2019). It was more than three years ago that the crucial first stage of the repair and restoration project began. Fortunately, All Saints received one of the last three grants – all to round tower churches – from the National Lottery Heritage Fund.

On June 1, 2016, a high-lift platform (“cherrypicker”) was used for a 360 degree inspection of the round tower. It confirmed that the damage was much more serious than an inspection in August 2015 had revealed. A combination of bulging flint and stonework and failing mortar were a serious threat to the tower. Vegetation was growing in many places where mortar had cracked and opened gaps aggravating the problems.

The water, which had opened gaps in the stonework, had damaged roof timbers too. A detailed “stone-by-stone” survey of the tower’s parapet revealed that the top was not perfectly circular – in fact, it is slightly “egg-shaped” measuring 154.7 ins (3.93m) by 149.6 ins (3.8m).

A series of five-yearly or quinquennial inspections had noted increasing concerns at the state of the tower. Flints and some large fragments had fallen, where mortar had weakened partly through age and by water damage.

Although the parochial church council had applied for a Heritage Lottery Fund grant, which had been rejected about five years ago, a second approach was made. Interestingly, round tower churches including Merton, near Watton, and Stuston, near Diss, and of course, Threxton, near Watton, were awarded the HLF’s last three major awards.

The 40ft tower faced some testing problems. The protective lead covering on the tower was failing, partly because of a lack of overlay. As a result, water damage was noted to the oak boards, which ranged in width from 12 to almost 18 inches. A long-term repair strategy has been implemented to ensure that water can drain across the roof quickly without running down the tower and causing further damage to the mortar. The lead has been re-laid to ensure a decent overlay – protecting the roof timbers.

The upper section of the tower, built later with brick, was also becoming precarious. A good number of late Victorian bricks were found, which have been incorporated into this extensive repair. Many of the coping stones, including some which have already been re-used, have been kept. However, new, longer coping stones were needed and have been sourced from a Lincolnshire quarry have been added. In addition, the south porch gable was also in a poor state and needed repair. The rainwater goods, ie guttering and downpipes, on the nave and north aisle have been replaced.

A “hard hat” day was planned at the church on Friday, August 9. The church’s architect, Ruth Blackman, who has been advising the PCC since the mid-1990s, was briefed a steady stream of visitors.

Specialist heritage building firm, Pikestaff, of Sporle, was the main contractor. The site foreman was Adam Purple with fellow co-director Edward Preston and a young stonemason, Brett Tarling, among the key people. The surveyor and project manager was Colin Borley, of Pimys, of Woodbridge, and ecologist Etienne Swarts, of Diss-based Greenlight Environmental.

While the church is thought to date from 14th century or possibly slightly earlier, it may have been built on the site of a Roman villa. Remains from Roman days have been found including some in the churchyard.

See Stephen Hart’s definitive report. Click on his name (above) to view.