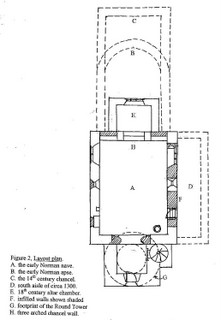 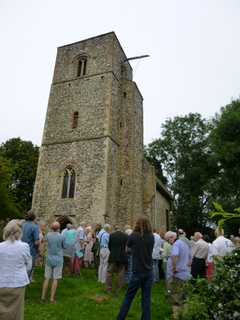 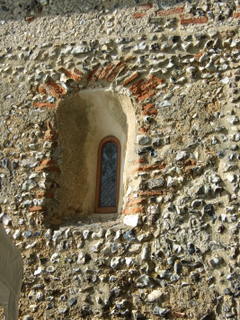 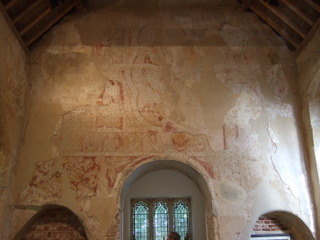 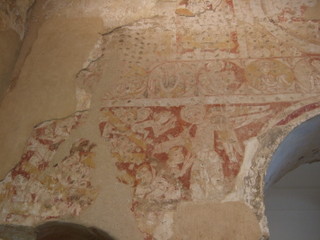 In a remote spot, near Necton, south of A47 and east of A1065 near South Pickenham.

The church was derelict in 1992 when Bob Davey took on the phenomenal task of bringing it back to life. As Richard Harbord reports in an article in The Round Tower (December 2007), when the floor of the square tower was lifted as part of repairs in 1997 the foundations of a round tower was revealed.

The report of the excavations (published in 2000 as Norfolk Landscape Archaeology Reports 497 and 583) estimated that the date of the present church was early Norman c1090.

The fabric of the church includes a great deal of Roman material, tiles and dressed stone from a nearby villa. The nave has two double splayed windows and a round chancel arch of Saxon date.

The apsidal Norman chancel was replaced by a shorter one in the early 1800s. The round tower was probably built onto a pre-existing church, possibly in c1300 when a south aisle was added and two arched openings cut through the south wall of the nave. This aisle was later demolished. The walls of the nave were later heightened and the tower arch rebuilt: this may be when the round tower was replaced with the current square one. Several layers of wall paintings have been revealed. The earliest layer may date to 1080, making the church and the paintings one of the earliest surviving churches in Norfolk. There is an excellent leaflet available at the church and at https://www.houghtonstmarys.co.uk/Church-of-St-Mary.pdf.

The remains of round towers were also discovered at Martham, Redenhall and Carleton Forehoe. There is an article about the excavation at Carleton Forehoe in The Round Tower (December 2014).