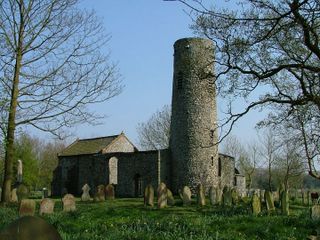 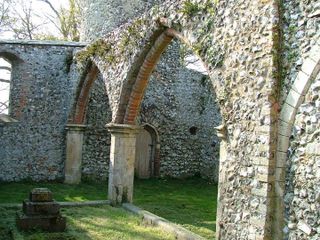 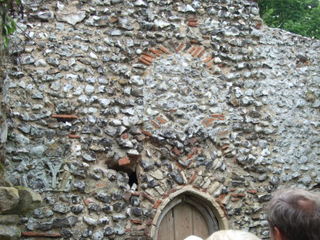 The church is no longer in use but the chancel was retained as a mortary chapel and is still roofed.

The tower is tall, tapered with thin walls. The flint-work of the tower is mainly of whole field flints with rough coursing in contrast with the gable wall which has no coursing. Stephen Hart suggests that the tower is Norman, while Richard Harbord (in The Round Tower June 2009) argues for a Saxo-Norman date (ie 1080-1120).

The tower arch was very tall and narrow: it was was partly blocked up (the fill included narrow Roman red bricks) leaving space only for the present small door.

The internal walls of the tower space are still plastered and no imposts are visible. As the north wall of the nave and west gable wall are of equal thickness, the tower may have been added to an earlier church.

The current Norman church was given a south aisle and porch, probably in about 1300. The reveals of the south door are of Roman red brick. The font was taken to Holy Trinity Church (dedicated in 1864).