Font, St Mary in the Marsh. 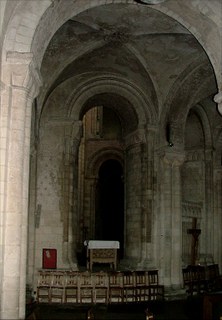 Chapel, St Mary in the Marsh.

Norwich, St Mary in the Marsh (a lost round tower church within the cathedral precinct).

St Mary’s in the Marsh, by the Norwich Cathedral, functioned as the parish church for the people living in the precinct. It lay to the south of the Lower Close. A fine new seven sacrament font was installed in the 14th century.

In 1560 the church was closed, the parish merged with nearby parishes, the building materials sold off, and valuables taken to other churches. In 1564 the parish was allowed to worship in the Cathedral, in St Luke’s Chapel in south ambulatory.

The font in St Luke’s chapel is from the original church. Look also at the Dispenser Retable behind the altar which was placed here. It is one of the finest examples of late C14 artwork in the country. The church was converted into houses, rebuilt in the late C18, called St Mary’s Chant. The cellars of one house include part of the wall of St Mary’s and it is thought that the base of the round tower was destroyed to create the cellars for an adjoining house. A blue plaque indicates the site of the church. Richard Harbord examined the evidence for St Mary-in-the-Marsh Church, Norwich in The Round Tower March 2011.