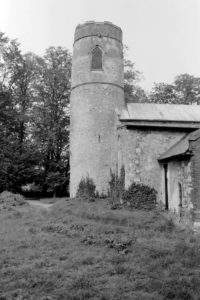 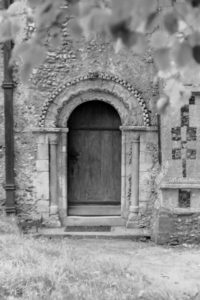 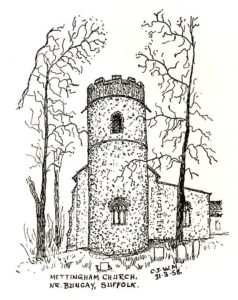 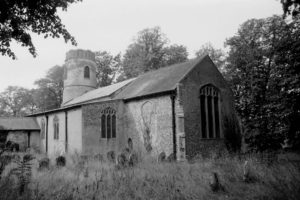 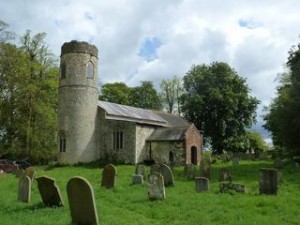 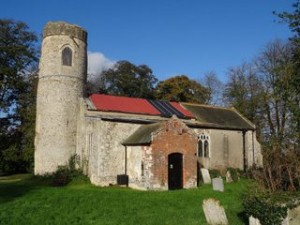 A brief guide for members attending the 47th annual meeting in September 2021 by the Society’s secretary, ‘Lyn Stilgoe.

The tower here was probably first built in the 13C, and is circular all the way up. The belfry openings have a simple pointed arch and there is a parapet above with alternate panels of flints and stone work.

The ground floor window was inserted during the 15C, and there are two small earlier slit windows on the first floor. The iron band circling the tower below the belfry was possibly part of the restoration in 1898?

The nave is 12C, with its west quoins formed of flints for about three-quarters of the height, still with its finely carved round-headed doorway facing north. Its outer mouldings are billet shaped, then there are variations of chevrons patterns supported on scalloped capitals.

At the crown of the arch is a grotesque beast head. This ancient doorway is not protected by a porch!

There was a south porch, added at the same time as the south aisle, but the porch was extended in brick southwards during the 19C to form a vestry.

The south chancel has just one blocked window, still with its tracery visible, and a former priest’s doorway, also blocked!

The east chancel wall has been rebuilt, and now has a gable formed of red brick from the 18C. All the windows appear to be large 15C ones.

Above the north door are a rather dark set of Royal Arms, said to be for George III. The 15C font stands in front of the pointed tower arch. It has four battered lions round its stem, each sitting on a head corbel, two male and two female! These lions are missing their forelegs! The plinth has quatrefoils round and mini-lions on the angles. The bowl has four seated lions alternating with four angels holding shields. There are engaged pinnacles on shafts on the angles of the bowl, and fleurons round the rim, in the corona alternating with heads, and in a band below the corona, which supports the bowl.

There is a miniature stone font and cover, kept within the main one, which was portable so could be taken to a home in an emergency.

The south arcade has two octagonal pillars separating it from the nave. There is no Rood screen, but in the chancel the south choir stalls have some re-used panels from a screen. The north side of the chancel has some 15C bench ends.

In the sanctuary there are two piscinas, each with a petalled bowl, the west one at a slightly lower level. Both have cinqefoiled arches, though the west one is more pointed and its arch has an ogee top.

The north chancel window has an heraldic shield in a roundel of 15C glass. It is for John of Norwich, who built Mettingham Castle, (1 mile to the south), in 1342 and founded a College of Priests, first at Raveningham, then Norton Subcourse, and moving here in c1393, taking over the Castle premises.