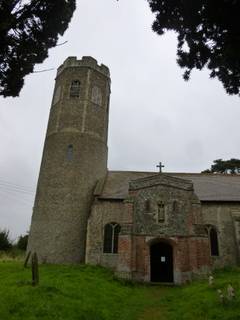 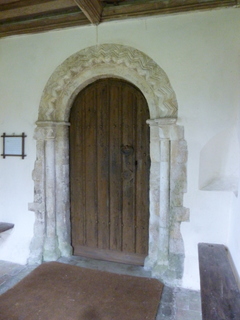 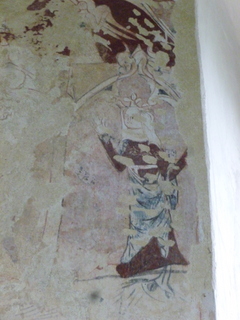 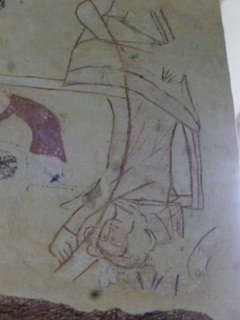 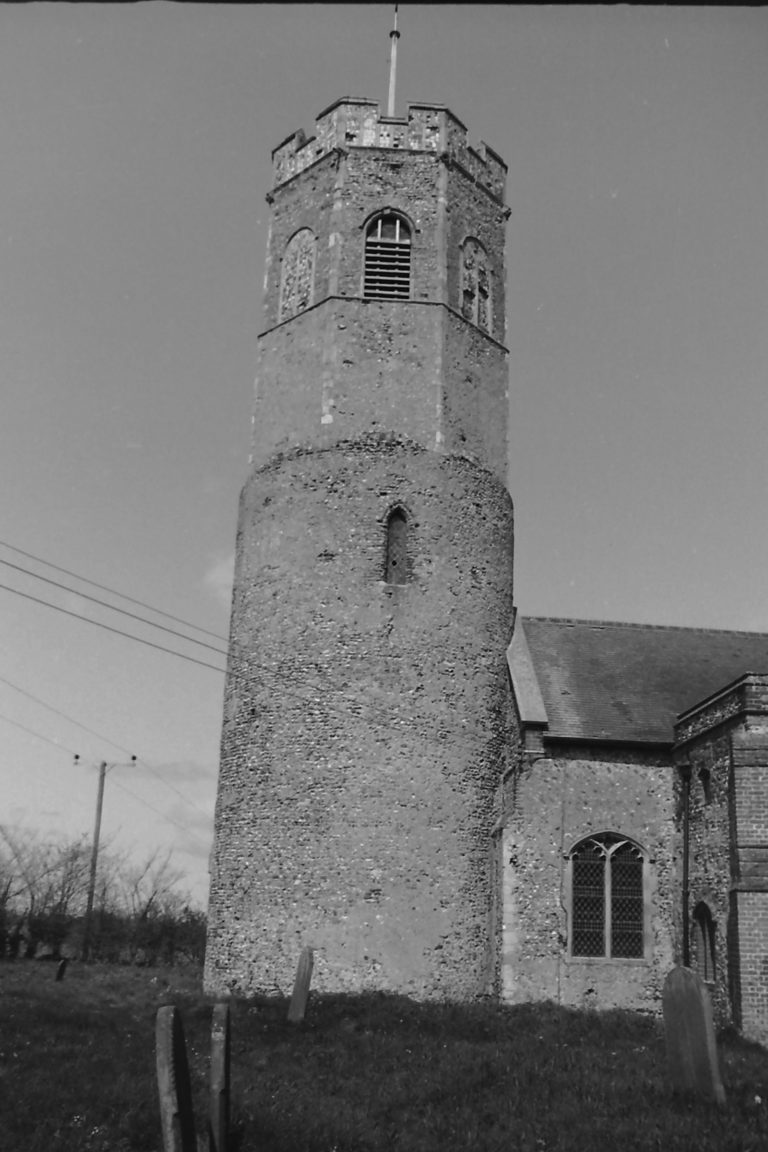 The nave has a Norman north window, two Norman doors and Caen quoins at the west.

The walls are of uncoursed rubble with brick only at the top section where the wall has been heightened. This contrasts with the well-coursed flintwork of the tower which also includes bricks, suggesting, according to Stephen Hart that the tower is later than the nave, probably not before the early C14.

This date is supported by the pointed south window framed with brick and the unusual double tower arch: the lower arch an opening cut through the nave west wall and dressed with stone, and the taller one built as part of the added tower.

The tower is circular for about half its height with a two-stage octagonal upper part. Both parts are of the same fabric. The octagon stage has stone quoins and a stone string course between its two stages and another between the belfry stage and the flushwork parapet and internally there is continuity between the round and octagonal sections suggesting that the two sections were built at the same time. Porch is C16th.

It has some interesting wall paintings, including a Wheel of Fortune, a church and a female figure.

A brief guide for members attending the 47th annual general meeting on September 25, 2021 by the Society’s secretary ‘Lyn Stilgoe.

There are a collection of four Ilketshall vllages round here, named after their churches, and two of them have round towers. The tower dates from the 14C, and has two octagonal stages, though internally it is circular to the top. It was added to an earlier nave.

All the tower flint work incorporates red brick, though the belfry stage has a higher proportion of brick. There are also brick-framed put-log holes (for the horizontal scaffolding poles).

The four belfry openings have lost their tracery, but the alternate sides have flushwork dummy windows with 14C tracery. The parapet also includes flushwork patterns. There is a blocked stone doorway of the 12C in the north nave wall.

The present chancel was added in the 14C. The porch is largely made of red brick, around 1500, and then raised higher in flints. It has two slit windows and a central niche above its Tudor-arched entrance. It protects a 12C doorway with chevron patterns.

The staggering thing about this church is the survival of extensive wall paintings. These were only discovered in 2001, and much more was revealed during conservation work in 2005.

The north wall has a representation of a church building, painted about 1165, believed to be part of the original decoration of this church. Under its east arch is an altar and chalice.

On the south nave wall is a Wheel of Fortune from about 1320, portraying Fate in control of Destiny, though later manuscripts show God in the centre. To the left is a man on his way up in life, at the top is a seated king stating REG NO (I reign) and to the right a falling man on his way down! Around this are traces of a Doom painting. Only one other such painting survives, in Rochester Cathedral. To the east, are more figures, done by an amateur hand, but with the same buckets of paint!

Here is a female with a crown and wimple, with a blue robe over a dark red tunic. It is most unusual for traces of paint to survive! What is normally seen is just traces of colour that have seeped into the plaster.

Also to note: 14C pointed tower arch, 15C font, 16C pew back near the door, painted shields within the garter motto on the west wall, for Thomas Howard +1646, (an unusual survival, perhaps once used to mark the family pews?), angels in the chancel roof, the east four being 17C, others 19C copies.

The carved wood set of Stuart Royal Arms, above the tower arch, is probably for Charles II. This was once thought to be for Anne, but closer study revealed that the “C” had been changed to “A”.