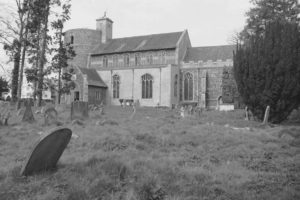 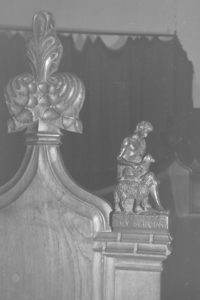 Detail of pew end - "Thy Servant" carved under this splendid decoration. Taken by Bill Goode in April 1976. 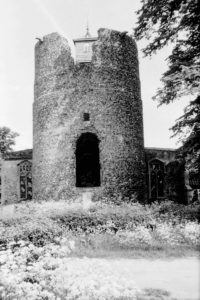 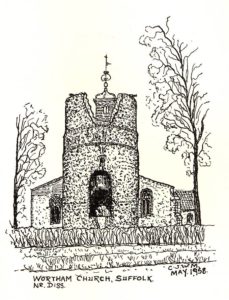 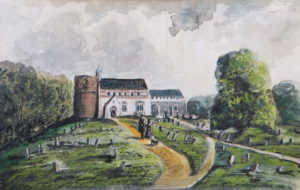 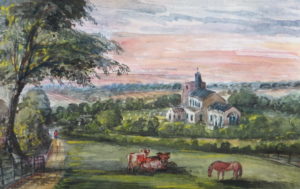 A “stitch-in-time” pilot fund has enabled modest repairs to be carried out. These ranged from clearing ivy from the tower to painting gutters and downpipes, said churchwarden Cathy Hume.

“It has enabled a number of increasingly urgent tasks to be carried out and it will help to keep the church in a good state of repair,” she added. “We’ve been very fortunate to receive financial help of almost £9,000 towards this work, said Mrs Hume. An application was made for funding through the Taylor Review, which is funded by the Department for Digital, Culture, Media & Sport (DCMS).

Wortham was awarded about £9,000, which made it possible to hire a “cherrypicker” to carry out high-level maintenance and small-scale repairs. Vegetation has been removed, which will prevent rainwater goods becoming blocked, causing further costly damage.

A key recommendation of Bernard Taylor’s report in autumn 2016 included a pilot project in Suffolk and Great Manchester to fund small-scale repairs to churches of under £10,000. It will ends its 18-month programme, with funding of about £2.5m in March 2020. Lessons from the pilot will help to formulate a long-term strategy, which should benefit conservation and  repair policy of places of worship.

While this first stage has been carried out and greatly to the relief of Mrs Hume, who has been a churchwarden for the last six years, a far costlier challenge is looming. A major crack in the crossing wall needs increasingly urgent attention and the porch is also showing more obvious signs of severe damage.

A pictorial “legacy” by a Victorian rector has helped to raise funds for his round tower church. He painted every house and listed all the inhabitants in Wortham, near Diss, in 1860 and then had the watercolours bound into a volume for his wife Mary Ann.

The Rev Richard Cobbold, who devoted his life to ministry in this Suffolk village for almost half a century, even bought a house for the family’s former nurse.

It took two years of research and study by a team led by author Sue Heaser and collaborator Maureen Ling to produce a stunning 152-page book. They identified locations of the original watercolours and matched surviving houses and cottages with the current names.

The Rev Cobbold, born in 1797 in Ipswich into a leading Suffolk family of  brewers, bankers and merchants, was the 22nd child of 24. Graduating from Cambridge in 1820 and ordained in that same year, he married Mary Ann Waller two years later. His father, John Cobbold bought the living of Wortham for them as a wedding present. After the death of the incumbent, they and their three young sons moved to the village in 1828.

For 49 years, he was a caring priest, who used the profits of his best-selling book, The History of Margaret Catchpole, published in 1845, to improving life in the village. He supported a home for elderly people, Prymes Cottages and the village school. At his funeral in January 1877, the procession was more than a mile long.

His pictorial record, Features of Wortham, included detailed descriptions of the villagers in his copperplate handwriting. The actual volume in the Suffolk Record Office measures 17cm by 11cm (7 ins by 4 ins) and contains 111 watercolours which were all painted between May 4 and July 19, 1860. By good fortune, a charity, the Friends of the Suffolk Record Office, had managed to buy the original volume in 1999. It has allowed publication of the full-colour illustrations and text in this book, which has been produced to benefit the church.

The Rev Cobbold was painstaking in his descriptions although it was clear that as a Church of England priest he had little patience for dissenters. He had a good eye for composition and included many shades and aspects of rural life into this work of art. He painted his dog, probably a black Labrador, lying in the gravel drive of his house as well as scenes of farm labourers hay-making, drinkers sitting on a tree trunk outside a beer house, horses bringing in the harvest, or children playing around the village.

As a social record, this volume is fascinating. In his description of the church, he notes that it was in “a very neglected state” when he arrived and two years later, he planted all the limes around the churchyard.

In his painting, the church from Rectory Meadow, there are cattle (probably Dairy Shorthorns) and a horse grazing while a couple walk down the lane, one wearing a red uniform. Were they heading to the church to get married?

In another vignette, he mentioned a former Waterloo soldier, John Bush, who after paying his rent was given a glass of strong ale. When he returned to his cottage, he sat on the edge of the well, became dizzy, and fell 60ft. “Wonderful to narrate he took no hurt – he was cured of drinking by a cold water bath,” wrote Rev Cobbold. Of Dashes Farm, he states that a Mr Henry Potter had a large dairy and made much money in the late war – and was supposed to be worth between £30,000 and £40,000! A veritable fortune.

When Maria, his former nurse, for some 20 years at St Mary’s Green, Ipswich, moved to the village and became his cook, he bought a cottage for her. She had married a farmer, Christmas Durrant.

As he admitted in his volume, he sold his living and had to seek an “accommodation” from his bankers, partly to pay for the marriages of his sons and find the required £300 for the cottage.

All proceeds will help the restoration of the church. A first edition of 250 copies was printed. Details – www.friendsofworthamchurch.weebly.com