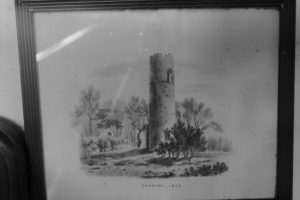 An 1822 illustration of Keswick church. 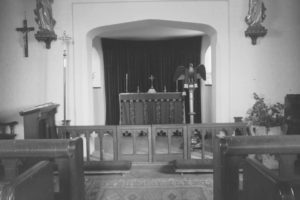 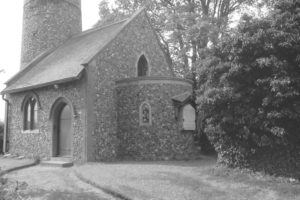 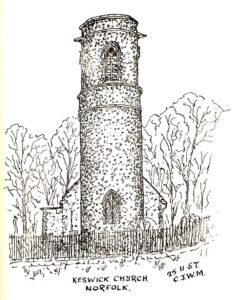 A Claude Messent drawing of All Saints. Copyright, RTCS.

A churchwarden, Lord Dannatt, who welcomed the Society’s members in September 2019, mentioned that a hymn may have been inspired by the rolling countryside around the church. John Hampden Gurney (1802-1862), who was Rector of St Mary’s, Marylebone, and a Prebendary of St Pauls, wrote the hymn “Fair waved the golden corn” and many others. He also penned verses for “Ye holy angels bright.” He was the son of Sir John Gurney, a High Court Judge, Baron of the Exchequer, son of Thomas, who was noted as a shorthand writer in London. Thomas claimed  connection with the Norfolk Gurneys and Dan Gurney’s “Record of the House of Gournay,” known by the family as the Apocryphal Book of Dan! Report in The Round Tower, December 2019.

Keswick Church has seen many changes in fortune over the centuries.  It is possible that it may date from Saxon times as indicated by the ruined east wall and the flint quoins at the north and south corners. But for more than 300 years, it was not even a parish church.

The round tower dates from medieval times and many of the outside flints are knapped, exposing the shiny inside of the stone. This technique of using cut flints is thought to date from the early 14th century. The tower is a later build than the remains of the chancel.

Keswick and Intwood churches were united in a single parish in 1598. Shortly afterwards, Sir Henry Hobart bought the two estates and decided to repair Intwood – used for many years as a sheepcote by the former owners, the Gresham family. Keswick church was effectively demolished. The bells and pews were removed from Keswick and taken to Intwood. By the 1820s, Keswick was dilapidated when Robert Ladbrooke visited.

When the Gurney family bought the Keswick estate in 1747, as Quakers, they had no use for a parish church. But when they later became members of the Church of England, they continued to worship at Intwood.

‘Lyn Stilgoe, who is a Gurney, wrote this brief item of family history, and details about the church.

John Henry Gurney I never lived at Keswick, which then belonged to his cousin Hudson Gurney till 1864. Hudson (1775- 1864) originally planned to leave Keswick to his niece Mary Jary Gurney, but after she eloped with the stable boy, he changed his will to leave it to her husband (and 2nd cousin) John Henry I (1819- 1890). He lived at Old Catton, and then at Northrepps.

It was his son, John Henry II (1848-1922), who was responsible for Keswick’s revival. In 1891, he gave the churchyard – then farmland to the edge of the ruins – back to the Rector. And two years later, he decided to repair the tower and build on to it a mortuary chapel – the present nave. In 1920, he applied for the church to be recognised as a parish church again.

The apse for the sanctuary was added in 1964 when it had been intended to re-use the flints from the ruined walls. However, the Saxon mortar proved too hard to demolish.

John Henry II lived at Keswick at the New Hall, which had been built by Hudson Gurney in 1819. John Henry II’s son, Gerard, who died 1934, with no children, left Keswick to his cousin Quintin Gurney 1883-1968. Incidentally, the Keswick estate hosted the Royal Norfolk Show on many occasions. In 1947, marking the centenary of the Royal Norfolk Agricultural Association, King George VI and Queen Elizabeth, visited the annual show.

Taken from The Round Tower, December 2019.