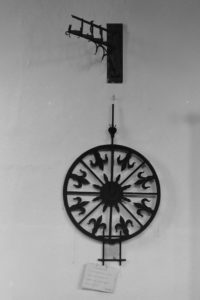 The Wheel of Life at St Mary, photographed by Bill Goode in July 1975. 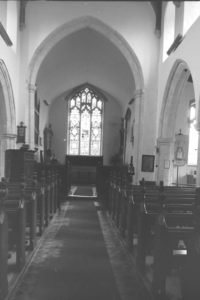 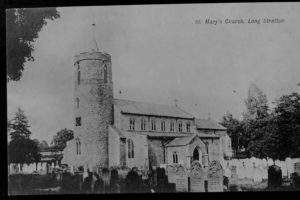 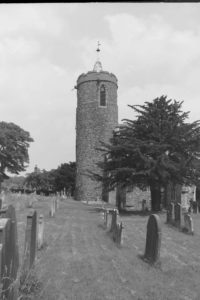 Tower at St Mary, photographed by Bill Goode in July 1975. 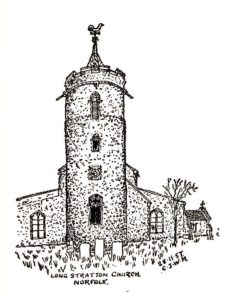 In Norfolk Archaeology, volume 9, page 205, the Rev W H Sewell, MA, describes a visit to St Mary’s, Church, Long Stratton. There he notes the sexton’s wheel. It was described as: “A pair of wheels formed of sheet-iron, made to revolve backwards and forwards when held or hung up by a handle, which kept the two wheels together.

“Folk would visit the sexton and try his wheel, to ascertain on what day to commence a fast. Each wheel had three strings attached to it, assigned by some mark, to the six days respectively sacred to the Virgin, and when, after causing the wheel to revolve, the sexton bid them catch a string, the one caught indicated the day to be chosen for the fast. “It was a practice in addition to the regular Saturday fast, for devout penitents to fast on other non-fasting days, fasting on that particular day they had chosen every week for seven years, or fasting as many days which together would obviously amount to one whole year.

“The difficulty was to know when to begin, for in pre-Reformation England as many as six days in the year were dedicated to St Mary, a problem solved by recourse to the casting of lots or a pull at the Sexton’s Wheel.

“The suggestion has been advanced that where a dial forms a complete circle with markings, etc it may have had a covering metal plate that was attached to it by a central pin that would permit of its being turned and used like a sexton’s wheel, but this is difficult to confirm. “There are several examples of the Saxon octaval system of dividing up the daynight to be seen in this district, the name not necessarily denoting the age, but the style of the dial, for undoubtedly many of those remaining have replaced worn-out predecessors.

“With the many-rayed circular dials, there is something very natural in completing a design, even though only half of it will be of service, for it is obvious that the sun cannot cast a shadow upwards, and where the spaces are numbered it is invariably only below the horizontal.”

When pellet holes are seen, as at Clippesby, one can imagine that a small indicator was inserted into the hole that marked the hour of the next service, or set the time for public worship. Norfolk and Suffolk possess more of these old relics than any of the other counties, and although their use went out of fashion with the introduction of clocks and watches they can still claim to be the most accurate timekeepers of the day – A R Bishop.