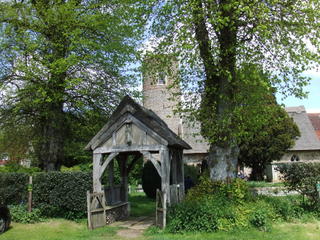 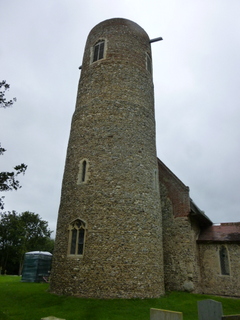 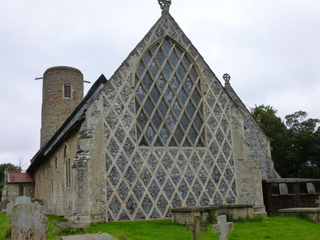 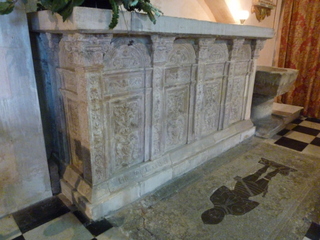 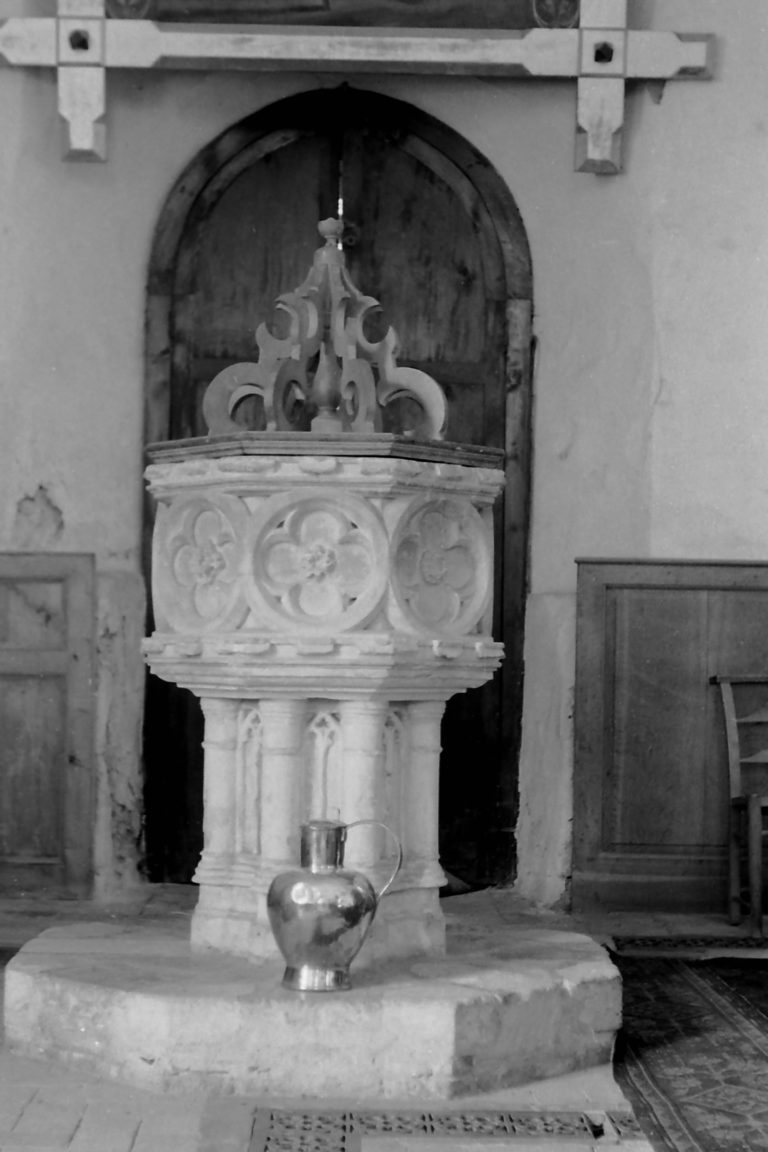 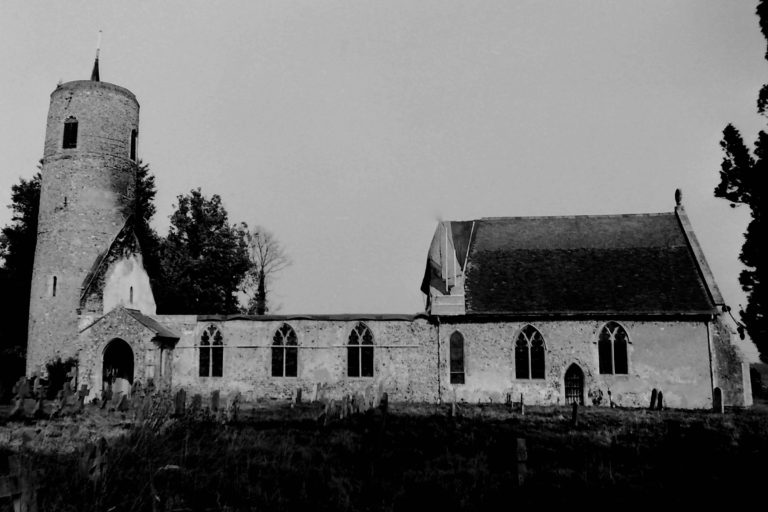 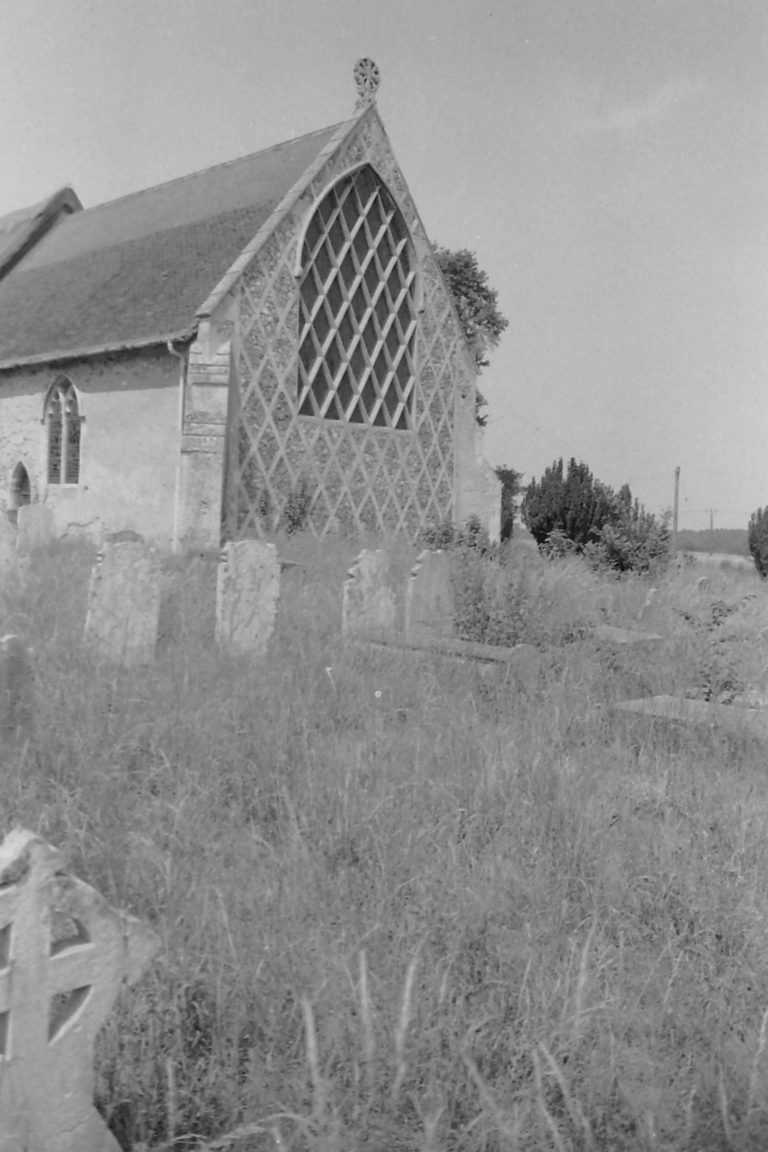 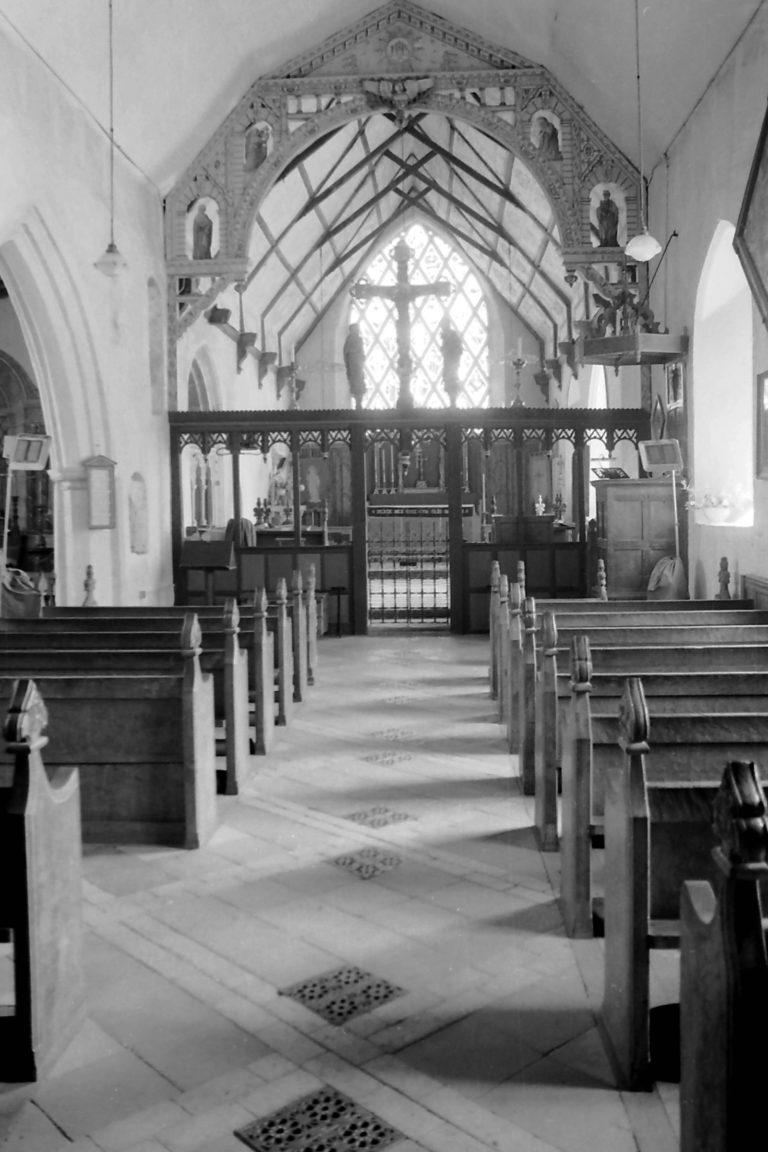 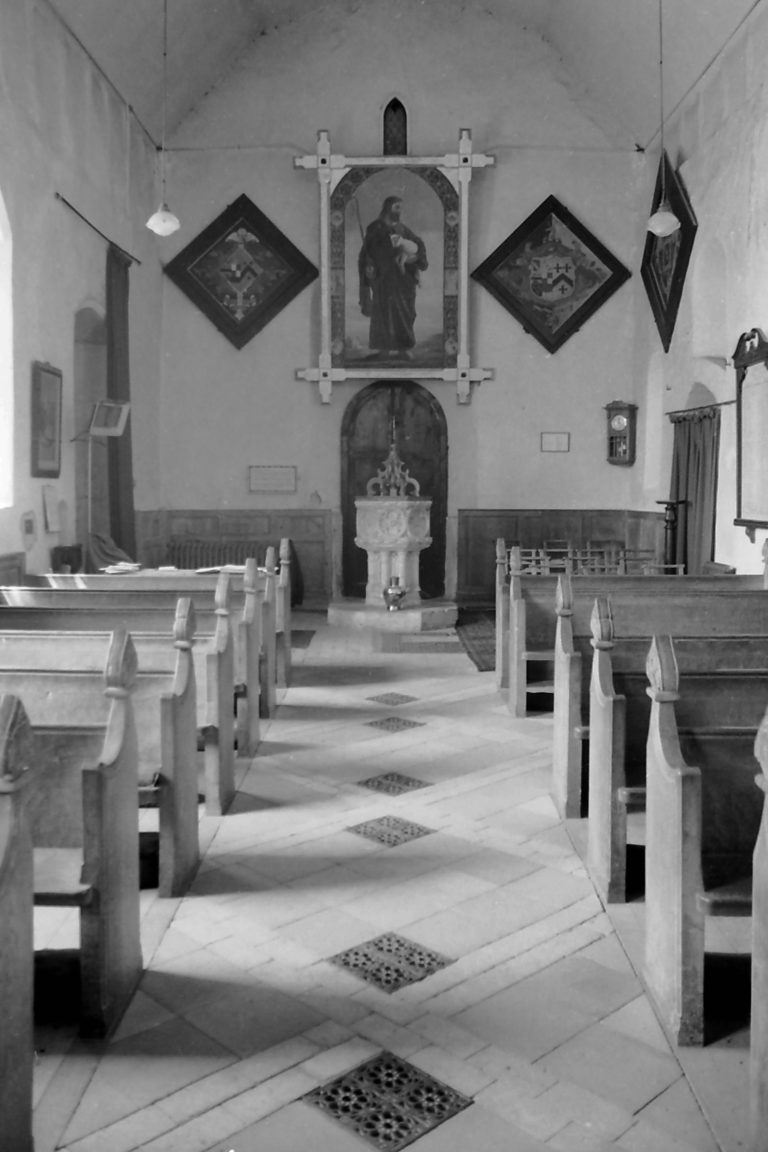 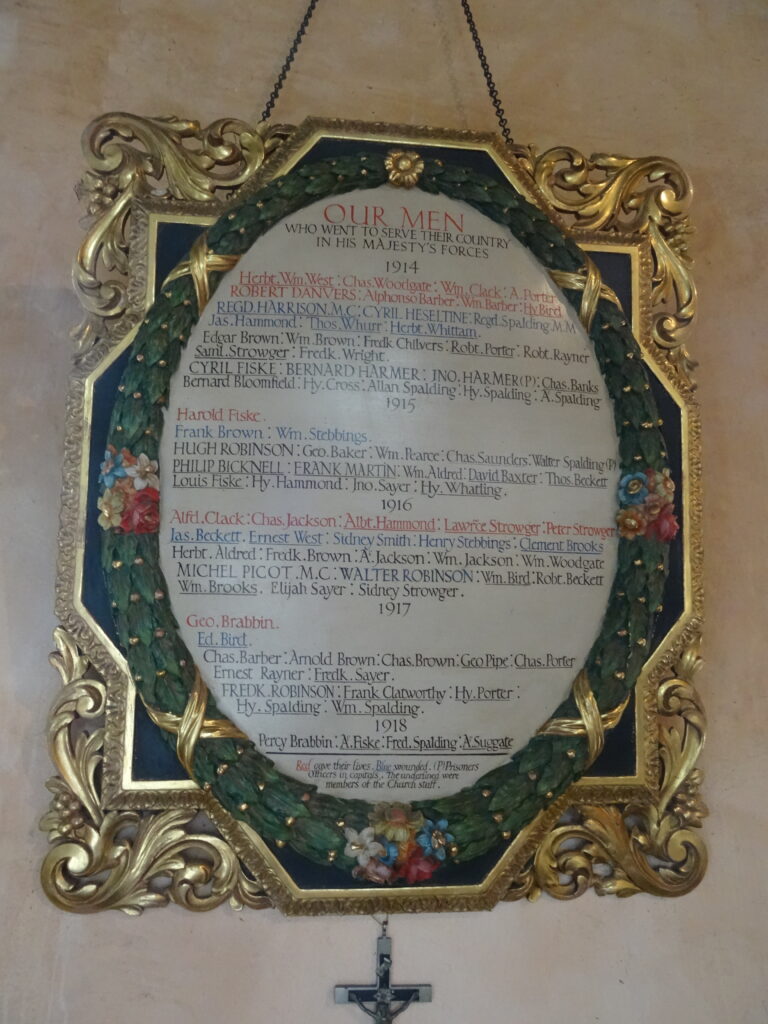 War memorial at All Saints, Barsham, photographed by Nik Chapman in September 2020. 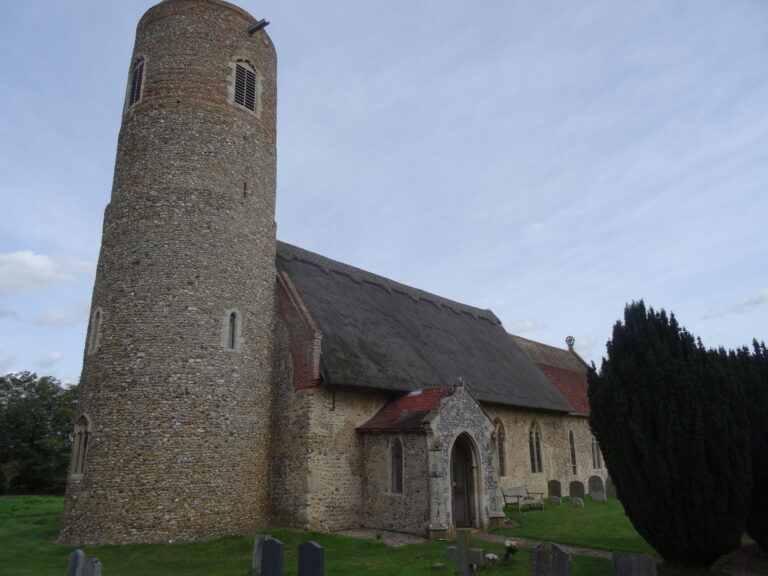 All Saints, photographed by Nik Chapman in September 2020.

The first stage of this round tower, reaching to the ridge of the nave, was built late13C/early14C, added to an earlier church. It has three stone-framed pointed windows and a lower west window that was inserted in the 19C.

The next stage was the belfry, but the openings were inconspicuously filled in with flints in the late 15C/early16C, to support the new belfry. There are two small brick framed windows in this stage. The top belfry incorporates much brick with the flints. In the nave there is still a 12C window above the 13C north doorway. The nave has a thatched roof, but the chancel is covered with red tiles.

The outstanding feature is the chancel east wall, where a stone pattern continues over the whole wall, imitating the diamond pattern of the tracery of the east window.

There had been a north chapel built in 1527, but pulled down c1785. The aisle was rebuilt in 1908 to celebrate Admiral Nelson’s mother, Catherine Suckling, who was born at the Rectory next door in 1725 as her father was Rector here.

There is a faint wall painting of St Christopher opposite the south doorway. The Royal Arms on the west wall are Stuart ones for Anne, with her motto “SEMPER EADEM”.

The font, with quatrefoils round the bowl is early 15C standing on the base of an earlier one.

The north aisle has a mural of a painted window above the altar, which is a replica of an Italian one. The central plaque is of the Blessed Virgin Mary and Child, similar to ones of the late 15C.

The square pulpit dates from the 17C, but has a new canopy above. The Rood screen is partly of the same sort of date, with a rood group installed 1893. Above it is a canopy arch of 1919, with free standing figures of the Annunciation to the Blessed Virgin Mary by the Archangel Gabriel, St Elizabeth and St Joseph.

In the north chancel is a terracotta tomb chest for Sir Edward Etchingham +1527. Nearby is a brass in the floor, of a knight in armour, remembering either Sir Thomas de Echyingham +1460 or Robert at Tye +1415. In this corner stands the bowl of the old 12C square Purbeck font on a new base.

A commentary by the late Stephen Hart.

Off the main road with view over fields. The tower is roughly coursed, with decorated windows, three stone faced lancets, two small slit windows with brick, and blocked belfry openings in first stages.

The belfry stage is made of smaller flint and brickwork and openings with stone frames and arches in Tudor style, probably added in late C15 or early C16.

The tower arch is double splayed with a pointed arch which Stephen Hart in his analysis of Barsham considers to be a post-Norman work: it was probably broken through the west wall, suggesting that the tower was added to an earlier church.

Jack Sterry includes Barsham in his 2005 book: Round Tower Churches on the Norfolk and Suffolk border.